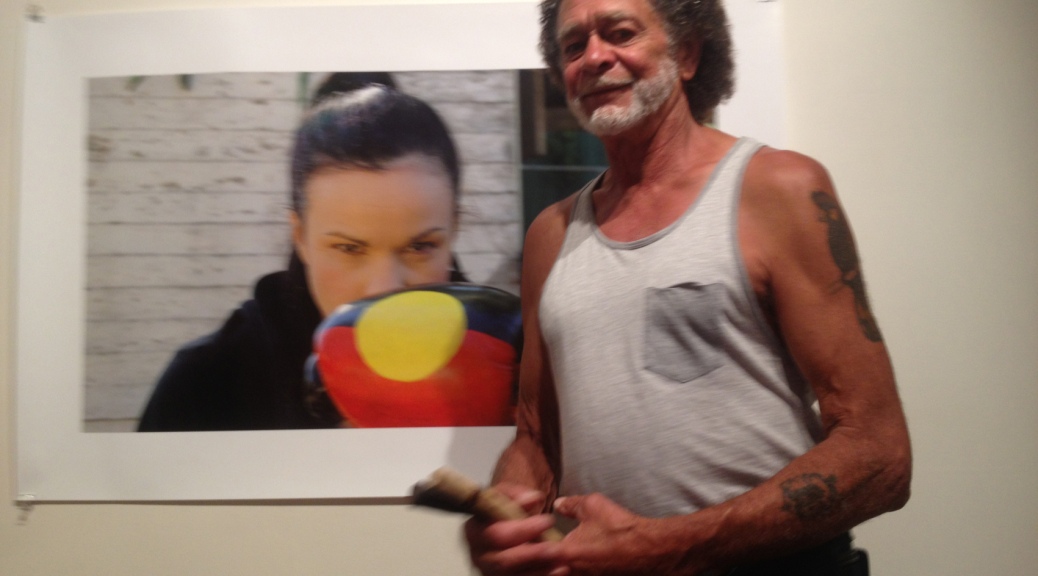 Richard Bell and Megan Cope traveled to Tasmania for the opening. To accompany the exhibition Megan Cope wrote a small essay in response to a document she found while researching material for ‘The Black Line’, the document is a British Military map ordered by the House of Commons, 1830.

This map is a powerful document that illustrates the intention, by the British Military, to initiate a process of ‘abolition’ against the Aboriginal people throughout the interior and east coast of Tasmania.

As an artist, I am interested in the power of suggestion and how we interact with maps. To this day, Australia revels in a settler/colonial hegemonic imagination. This map suggests successful elimination (the extinguishment of the Aborigine in Tasmania) and perpetuates a myth of such vitriolic feat.

The settler/colonial state renders Aboriginal peoples’ resistance to the brutality of colonial occupation from existence. And for many this is a mindset that continues to lurk in the periphery of the nation’s psyche. For an increasingly patriotic, ‘ANZAC’ proud, yet warless generation, the act and process of war symbolises power, strength, sophistry, and technology, and signifies for the fearful masses, a security in borders, territory, land, and society.

Though evidenced in numerous accounts, and heavily disputed in the ‘History Wars’ of the 1990s, the Aboriginal wars and prolonged Resistance is a narrative still largely invisible in telling the Australian story.

“In fact their attacks evinced ‘a cunning and superiority of tactic which would not disgrace some of the greatest military characters’” The Police magistrate of Richmond noted that “the peculiar nature and habits of these savages gave them a decided superiority over Europeans”(Reynolds, The Fate of a Free People, 1995)

Instead, texts such as the following are more readily available for research and echo in the minds of everyday Australians.

BLACK LINE, The Black War intensified in Tasmania during the mid to late 1820’s and escalated further in the 1830 winter when a number of settlers were killed. Seemingly incapable of ending the violence, Lieutenant Governor George Arthur in August 1830 authorized a military strategy to push all Aborigines of the Tasmanian mainland into the Tasman and Forestier peninsulas in the southeast. (Mitchell Rolls, Murray Johnson, Historical Dictionary of Australian Aborigines. 2010.)

Tony Albert has been commissioned to create a memorial for Hyde Park South in Sydney which honours to contribution made by Aboriginal and Torres Straits Islander service men and women.

The work will be launched on ANZAC Day 2015 to commemorate the centenary of of the ANZAC landings on Gallipoli. Albert’s family has over 80-years of combined military service.

His dramatic sculpture will feature four seven-metre tall, oversized bullets among three large-scale fallen shells to represent the diggers who lost their lives.

You can read more about the project here: http://www.sydneymedia.com.au/grandfathers-war-story-inspires-aboriginal-artwork/

If you’re in Sydney on the 29 November come and celebrate Christmas at the Museum of Contemporary Art with Tony Albert, who is curating the final ARTBAR for the year.
‘I’m dreamin’ of a Blak Christmas’ will feature Blak Santa (a.k.a the infamous Richard Bell), lucky door prizes, an Aussie pub cover band and a very special performance by David Page.
More information: http://www.mca.com.au/artbar

Earlier this month the proppaNOW exhibition Insurgence opened at the Museum of Australian Democracy at Old Parliament House (or MOADOPH for short). Vernon writes:

The irony in an artist group like us showing at Old Parliament House in Canberra was not lost on us. We were eager too for the opportunity to show our work in such close proximity to the Aboriginal Tent Embassy which continues to have much resonance for our people. It was particularly satisfying showing with Andrea Fisher whose work and strong ideas, as a former member of proppaNOW, are a welcome inclusion in the show.

proppaNOW’s exhibition ‘Insurgence’ opened at the Museum of Australian Democracy on October 22 and continues ’til March 11.

The Tide is High is Megan Cope’s first solo exhibition in Melbourne which opened on the weekend and will run until Oct 12 at Fehily Contemporary. 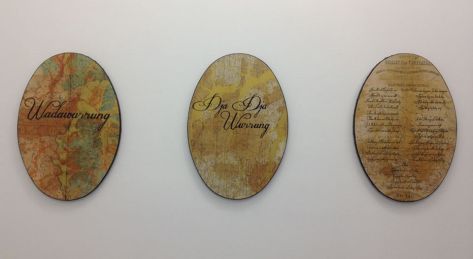 The exhibition also includes geological and mining maps of Victoria’s Gold Rush towns and an ice melting installation titled ‘Blood on the Land’ all of which connect to notions of the passive aggressive resistance to acknowledge Aboriginal ownership and occupation of Australia and Asylum Seekers.

proppaNOW are pleased to announce we will have a stall at the very first Boomerang Festival on the 4 – 6 October at Tyagarah (Bluesfest Site). For the first time since 2003, we will have curated a gallery of original t-shirt designs.

If you’re heading to the festival, make sure you pop in for a visit. If you can’t make it, we will have shirts for sale on this website.